Your questions and answers

Hazelinks is a research stream of the Hazelwood Health Study that uses population health datasets to investigate changes in the health of the community during and after the Hazelwood mine fire.

What is the Hazelinks Mortality Report?

The Hazelinks Mortality Report describes analysis of data obtained from the National Mortality Database (NMD) which is a register of every death in Australia. Using NMD data from 1 July 2009 (approximately 4 ½ years before the mine fire) to 30 June 2015 (almost 1 ½ years after the mine fire), the analysis aimed to answer three research questions:

1.  In mine-fire affected communities, did death rates increase during the mine fire compared to similar time periods before and after the mine fire

2. In mine-fire affected communities, did death rates increase after the mine fire compared to before the fire?

3. In mine-fire affected communities, were changes in the daily levels of mine fire smoke associated with changes in death rates?

What are the main findings in the Hazelinks Mortality Report?

The patterns of deaths observed in the Latrobe Valley over the period 1 July 2009 to 8 February 2014 were used to estimate what the expected risk of death was for the 30-day mine fire period when smoke levels were most intense and for the six months after the mine fire.

During the 30 day mine fire period

When all deaths were considered (irrespective of the cause of death), the overall risks of death in Morwell and in other fire impacted areas during the 30 day mine fire period, were similar to expected.

However, when cause of death categories were looked at separately, it was observed that there was a three-fold increase in risk of injury-related deaths in Morwell during the 30 day mine fire period. There was also a small increase in injury-related deaths in the rest of the Latrobe Valley and surrounding smoke-impacted areas during the 30 day mine fire period.

It was estimated that there was a total of 11 injury-related deaths during the 30 day mine fire period across all of the smoke impacted areas (including three in Morwell) that were “attributable to the mine fire event”; meaning that they were additional deaths to those expected.

The excess injury-related deaths were predominantly categorised as unintentional, as opposed to cases of intentional self-harm. In the Latrobe Valley, men and residents aged 80 years or older were at greatest increased risk of death from injury during the mine fire period.

Increases in daily mine fire-related PM2.5 pollution levels were found to be associated with increases in risk of injury-related death, suggesting a dose-response relationship.

During the six months after the mine fire

Was there an increase in deaths from respiratory conditions related to the mine fire during the mine fire period and in the following six months?

There were no associations observed between the mine fire and respiratory-related deaths. This is unlikely to mean that the smoke posed no threat to people with respiratory illnesses. Instead it is likely that vulnerable people with chronic respiratory illnesses took preventive action including leaving the smoke impacted areas, wearing protective masks and/or increasing their use of preventive medications or oxygen therapy. Other Hazelwood Health Study research streams have shown an association between the mine fire smoke and respiratory symptoms in smoke affected communities.

Why did injury-related deaths increase during the 30-day mine fire period?

The numbers of excess injury-related deaths (11 during the mine fire period) were too small to subcategorise into more detailed injury-types. Also, the National Mortality Database data did not allow us to infer what activities or behaviours led to the injury-related deaths. Therefore, we don’t know exactly what people were doing, or what types of injuries they sustained. However, there are studies showing that exposure to environmental pollutants can have adverse neurological and behavioural effects, such as reducing cognitive judgment and increasing anxiety, depression and self-harm behaviours. Anecdotal evidence suggests that some people in smoke affected areas may have undertaken risky activities, such as climbing ladders to remove ash or flammable debris from roofing, however the National Mortality Database did not contain this information.

GLOSSARY OF IMPORTANT TERMS USED IN THE HAZELINKS MORTALITY REPORT

PM2.5: Very small particles usually found in smoke that have a diameter of 2.5 thousandths of a millimetre or less. When breathed in, PM2.5 particles are small enough to travel deeply into the lungs and some can even enter the bloodstream. The Hazelwood Health Study uses PM2.5 levels as the main measure of smoke pollution during the mine fire.

Fire impacted areas: These are the towns/localities where the ground level PM2.5 concentrations were higher than usual for at least one day during the mine fire period. See Figure 1. 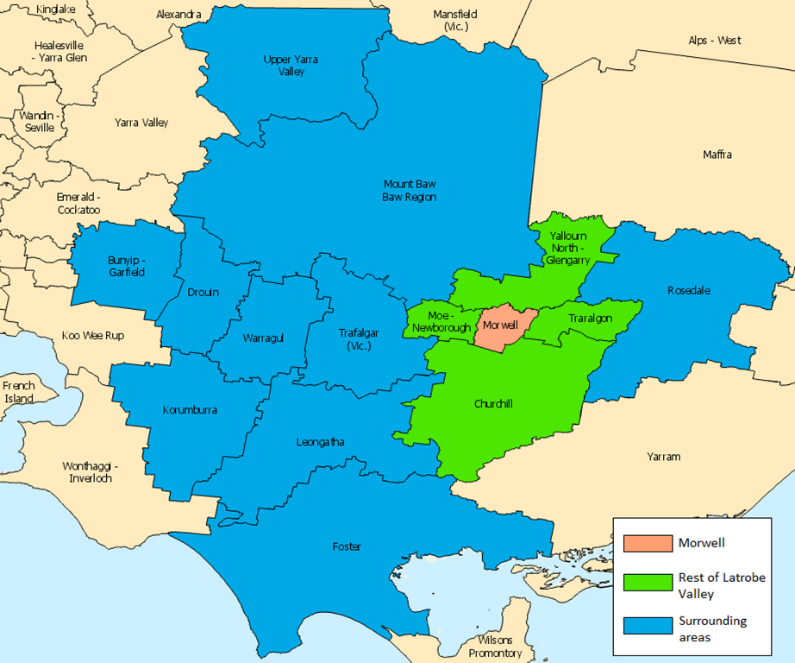 Mine fire period: The Hazelwood mine fire burned for approximately six weeks from 9 February 2014. However, in the Hazelinks Mortality Report, the term mine fire period is defined as the 30-day period from 9 February to 10 March 2014. That was the period of the most intense smoke exposure. Figure 2 shows the estimated smoke PM2.5 concentrations from 1 February to 31 March 2014 in the southern part of Morwell. The shaded section of Figure 2 shows the first 30-day period of the mine fire, when ground level PM2.5 concentrations were markedly higher than usual. From 11 March 2014 onwards, PM2.5 concentrations returned to very close to usual levels.

Six months after the mine fire period: The period from 11 March to 11 September 2014.

All deaths or all-cause mortality: These are counts of all deaths no matter what was the cause of death.

Injury-related death: These deaths were the result of an injury. Examples include injuries due to accidents (such as transport accidents, falls, accidental contact with force, heat or poison), intentional self-harm, assault and medication or drug overdoses.

A printable Mortality Report Questions and Answers is available here