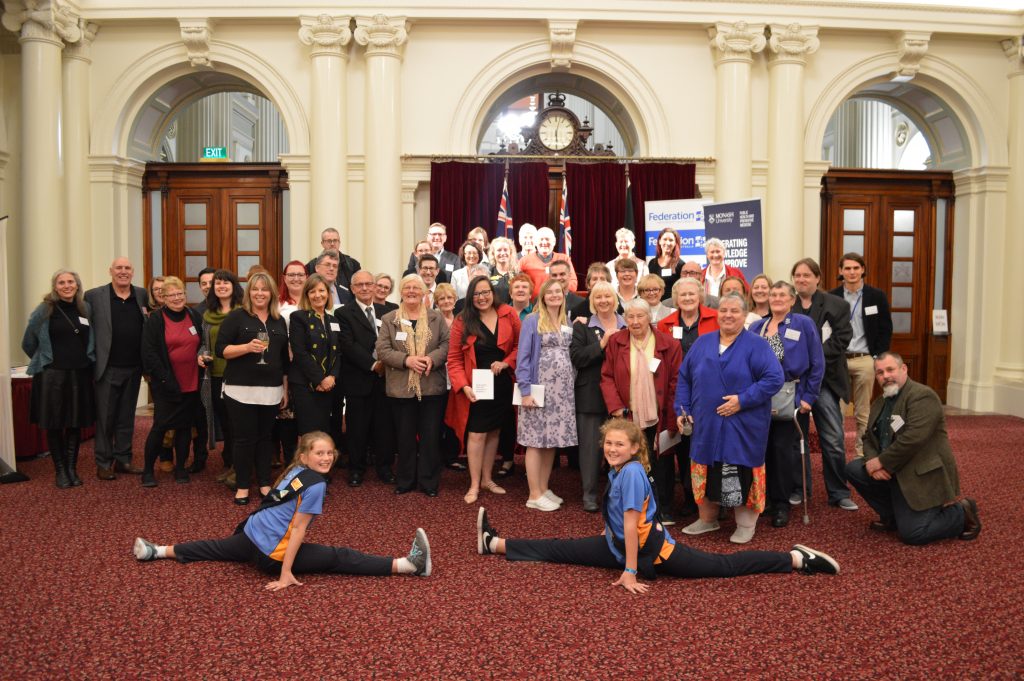 Amidst the ornate splendour of Queen’s Hall in Victoria’s State Parliament, voices from the
Morwell community rang out clearly. The ‘Our Hopes for the Future of Morwell’ photographic
exhibition is on display at Queen’s Hall from 21 May until 24 May. The exhibition comprises twenty-
eight photographs of community groups and residents holding objects that symbolise their
hopes for the future of Morwell. Powerful and thought provoking photos that capture important issues as the community moves forward from the Hazelwood mine fire and closure.

Community groups and individuals were asked to think of an object that symbolised their hopes,big or small, for the future of Morwell and then to be photographed holding that object. Out of this process, under the consummate photographic eye of Clive Hutchinson from Gippsland Centre for Art and Design, 28 photos with their captions were produced. Morwell
Neighbourhood House facilitated the photo shoot and provided the venue.

Monday night’s launch was attended by many members of the community who participated in
creating the exhibition, and featured speeches by a number of guest speakers, including Dr
Matthew Carroll, Senior Research Fellow on the Health Study; Professor Helen Bartlett, Vice-
Chancellor and President of Federation University; Ms Tracie Lund, Coordinator of Morwell
Neighbourhood House; Ms Caitlin Grigsby, President of the Latrobe Roller Derby; and Ms
Harriet Shing, Member for Eastern Victoria.

Ms Lund spoke with conviction about Morwell Neighbourhood House’s commitment to
ensuring many voices from the community had a chance to be heard – a commitment shared
with the Federation University research team. Ms Grigsby spoke movingly about how this
exhibition had given their group the opportunity to re-imagine their future: “The Latrobe Valley
has hope, and so should our wider community. This exhibition is testament to that.”
Don’t miss this beautiful and thought-provoking visual display exploring what the future holds
for this community.

To view images of the event, please click here.